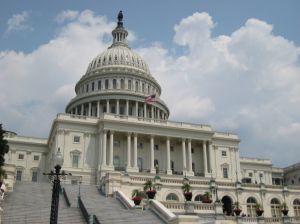 What happens when you take four of the biggest internet companies in history and join them all together behind the same cause? You get the newest powerful pro internet political lobbying group in the USA!

The giants of search (Google), eCommerce (eBay and Amazon) and social networking (Facebook) will in September officially launch “The Internet Association” and work together out of Washington DC to handle political and regulatory issues which effect the internet.

Google and Facebook already spend significant amounts of money on political lobbying respectively, however president of The Internet Association Michael Beckerman says that the group will work together to educate lawmakers about the internet, and tackle issues ranging from immigration (the ease at which foreign computer engineers can be hired), taxes, cybersecurity and internet privacy – with the latter being a big issue both sides of the Atlantic recently.

With the highly controversial Stop Online Piracy Act (SOPA) bill – which recently caused massive criticism and even protests from certain websites, most notably the Wikipedia blackout – currently on hold in the US, and the recent EU cookie regulations changing, it will be extremely interesting to see what these Goliath’s of the internet world can do, and if they can help to shape a better, more free future internet for us all.

For more information regarding internet privacy, security, or to find out whether your website adheres to the new EU cookie laws, then please do not hesitate to get in touch with the experienced and friendly Dijitul.com web development team today and see how we can help.