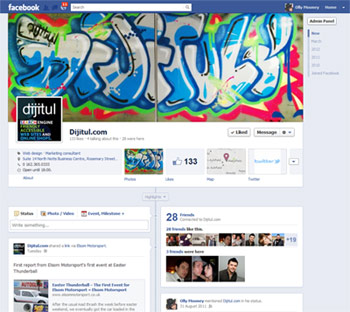 It may not seem all that long ago that we were all stumbling around rather tipsy to welcome in the year 2012, but rather amazingly we are already (or only, depending on how you view the year) a quarter of the year through, and its certainly been a busy and eventful one. Right from the most headline making international news stories, to whatever is happening in your very own life, there’s certainly been a few talking points this year, and as it continues to grow in influence on every day life, the internet is no different.

So, here is our own little summary of some of the things that have been going on in the internet world in the first quarter of 2012, enjoy!

Okay, this first one was officially announced in December 2011, but bare with us as much of the discussion over it has come this year, so it counts to us, and that is social networking giant and market leader Facebook unveiled its most radical changes yet, with the introduction of the new ‘timeline’ profile layout.

This saw Facebook user profiles undergo an evolution, which not only changed the layout of things, but made it possible for you, and others, to scroll back through all of your Facebook history in just a few seconds, finding any post from any month at any year since you signed up, and its safe to say it received mixed reviews. The advocates of the ‘timeline’ were quick to praise the stylish new layout and the fact that it was now much easier and quicker to find a previous comment or status update, however the detractors counter argument was that Facebook had again begun to push the boundaries with peoples privacy, and that now information or posts – potentially from years ago – that a person may not want someone to see, can easily be found, and perhaps lead to troubles in personal lives, with employers, family members or  a spouse. Despite this disagreement however, many peoples profiles are now in the timeline format, and its only a matter of time before it becomes compulsory and is rolled out across every page, what affect that will have on user numbers? Who knows? 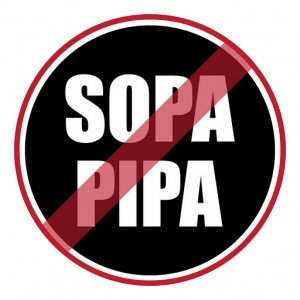 Away from Facebook meanwhile, in January a massive amount of the internet worlds attention was focused on the United States and the proposed Stop Online Piracy Act (SOPA) which was being discussed in government as an unprecedented way to enforce proper copyright laws upon the internet and punish anyone deemed guilty of online piracy, or using certain content without the proper authority. As was to be expected, the internet world expressed total outrage and was quick to point out exactly what SOPA being passed would mean, with plenty of pictures, info-graphics, banners and full scale explanations popping up all over the place to get the point across that, in short, SOPA would mean an end to the days of turning to Google or Wikipedia and having a world of free knowledge in just a few seconds.

In response to this, on the 18th of January, action was taken in protest to both spread general awareness of SOPA and show opposition to it, with the most high profile of this coming as the online encyclopedia, Wikipedia held a complete blackout for 24 hours, preventing anyone from using the service to show what would happen should SOPA take hold. It is estimated around 7000 other smaller websites joined in the blackout, whilst other internet giants such as Google had links or messages of protest on their homepages to show their opposition, without halting service, ensuring that the internet did not completely grind to a halt.

After surviving this however, there were even larger fears that the internet could completely go out in some places, along with power and phone lines, when the largest solar storm since 2005 came to earth and threatened to wreck millions of peoples day by leaving them without internet or mobile phone access – we won’t bore you with the scientific stuff, but lets just say, it passsed without any real effect, and the world, and internet, continued on, at least here at Dijitul!

Moving on to everyone’s (except Microsoft’s) favourite search engine Google, who always have something to tell the world about, and these first 3 months have been no different, several (albeit minor) algorithm changes have been seen this year so far, including further updates to last years major ‘Panda’ update, as they continue to tweak and twiddle things to provide the best possible results for every search, whilst, they have also made some rather significant changes to their privacy policy, although with the same top corner message popping up on the Google homepage on every visit for around 2 months, you probably already knew that…

With that, we reach the first quarters final significant news story, and this is probably one which is still fresh in your head following significant national news coverage, but a young univesrity student has been sentenced to serve around 56 days in prison, following ‘trolling’ comments he made on Twitter, following the collapse of Footballer Fabrice Muamba. The comments he made were certainly vile and racist, and no one can doubt that intense trolling through social media can reach troubling bad levels, but with arrests being made over internet comments has got the world wondering, is the internet any longer the playground for free speech?

So, there we have it, thats my personal take on the internet worlds start to 2012 (feel free to leave your own in the comments below), and what the rest of the year holds remains to be seen, but with UK internet usage having increased 50% in the last five years, you can be sure it’s going to play a big part in life, and that Dijitul will be here the whole way through with our web development services helping to take you and your business online.