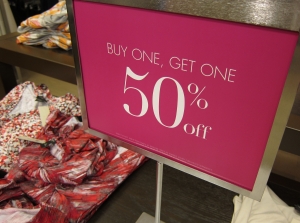 You’ve probably heard the term “Black Friday” used at least once before around this time of year, more than likely in the past with it referring to the chaos that ensues in major retail shops across the United States of America as desperate shoppers rush, scramble, and sometimes even fight to get their hands on dramatically reduced items such as televisions, smartphones and home appliances. However, whilst for years such an event has been confined to American shores, Black Friday as a whole is spreading across the world, and changing at the same time.

Traditionally beginning the first day after American thanksgiving, and marking the beginning of the Christmas shopping period, we have been seeing a bit more of Black Friday in the UK in recent years, and it now appears to be bigger than ever with Amazon, Asda, John Lewis and Very amongst plenty of stores holding their own sales or give-aways to mark the occasion – albeit not quite to the chaotic, sadly sometimes violent reactions that the sales get in the USA. Whilst Black Friday becomes more global though, the way in which it is undertaken is also beginning to change in other ways, most notably the way in which people shop over this cut price week, as unsurprisingly in recent years it has spread from being a solely high street event, to becoming almost – but not quite – equally an online practice too. In fact it has seen the spawning of a new term “Cyber Monday”, for the Monday after Black Friday, which is typically the biggest online shopping day of the year.

With financial crashes and technological advances, recent years has seen the number of people hitting the high street for their shopping take a significant plummet, with recent figures showing there are around 45,000 empty shops now across the UK. However, one thing that seems to get people back into the physical stores is a good old fashioned sale, with literally hundreds of millions of shoppers taking to the stores for Black Friday every year, and spending upwards of $50bn dollars altogether, extremely impressive numbers – and the scenes of crowded Asda’s and huge queue’s for discounted televisions across the UK over this black Friday show just how powerful these sales are, but the question is, can the traditional black Friday survive much longer in a world increasingly dominated by eCommerce?

Figures from earlier in the year stated that 73% of “online” UK adults have bought products online in the past year, and whilst black Friday statistics from across the Atlantic show that the number of shoppers going in to stores still outnumbers those who buy online, the gap is closing every year, and it’s not surprising when you think about it, as shopping for deals online allows shoppers to switch between stores quickly, view stock easily, and do it all so from the comfort of their own home, avoiding a several hour wait in the cold, and a scrum with hundreds of other shoppers from the last remaining items!

So, black Friday may still be something of a “ceremonial” beginning to the holiday shopping season, and it may well still drag in billions of dollars from the millions of shoppers who enjoy the occasion of going out to the stores just as much as they enjoy getting the bargains themselves, but in a world that is understandably turning to online shops over those made from bricks and mortar, will the crowds of black Friday, boxing day, and the January sales continue to excite and frustrate, or will they soon be a thing of the past? We would love to hear your thoughts in the comments below!

For more information regarding eCommerce, online shops and taking your business online, please do not hesitate to get in touch with the friendly Dijitul web design and development team today on 01623 650333, or via the contact form on this website. Alternatively you can tweet us on @Dijitul, or find us on the Dijitul Facebook.